at home on Valentine's Day

Dhanno came back home and said, "I am very impressed with my friend Ish."

She said, "Her friend Hit is gay. But Ish said he's her best friend."

Dhanno said, "But it's just that Ish is not even bothered by it. She takes it so normally."

Dhanno said, "No reason. I don't mean to say being gay is wrong. But just that ... I mean, I've never known anyone who is gay."

I said, "Well, as you grow up, you will know more and more people who are gay."

Dhanno said, "Yes, mom, even biology says that you have sexual organs to attract the opposite sex to be able to reproduce."

I said, "Whatever. But when a large proportion of people are homosexual, then how can that be abnormal?"

Then, she said, "I'm just so impressed with Ish. I mean she takes it so normally."

I said, "You are so fazed by this, because of all the gay characters you usually see on TV or film."

She said, "Come on, it's not that. I know they are not bad people."

I said, "No, it's not about good or bad. It's just that you see gay people on screen wearing strange clothes, walking and talking in strange ways. So, that's what you think they will be. But gay people look just like you and me."

I said, "For instance, Rock Hudson. He was gay."

I said, "So what? Does that make him any less good-looking, charming, less of a star? Does it make you like him less?"

She said, "Why did you tell me? I like him so much. Now please don't tell me Leonardo Di Caprio is gay." 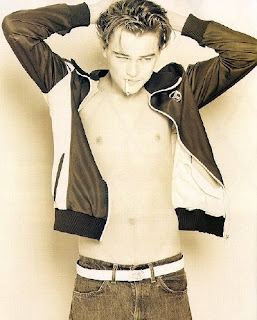 She said, "Why did you tell me Rock Hudson is gay? I like him. I wanted to meet him."

She said, "Oh no. Mama, how could you do this to me on Valentine's Day? First, you tell me he is gay, then that he is dead. Did you need to do that?"

She hit back by saying that we were the most boring couple she knew, since we had no plans for Valentine's Day, then ignored us, and thought it was time for dinner.

By the way, don't miss checking out

The Stags in The Steam Room PS: Dhanno says I have my biology all wrong. It's not our sexual organs, but our secondary sexual characteristics like color of skin and hair, body odour, and voice and their differentiations between male and female that are meant to attract the opposite sex. It's back to the classroom for me.
at February 15, 2009

Email ThisBlogThis!Share to TwitterShare to FacebookShare to Pinterest
Labels: Dhanno, of family and friends, real world, the movies

The modern day equivalent of learning that there is no tooth fairy? (pun unintended)

Poor Dhanno, I can totally sympathise. One friend of mine told me about a favorite actor of ours being gay - just when we were in the middle of watching a very romantic scene involving said actor! It totally ruined the romance for me at that moment. That said, I loooooove Rock Hudson - so I guess I grew up after all!

Hmm... did they really need steam to heat up the room with all those "stags" in there?

Your daughters problem is that of being able to identify a mate. She is in the age bracket where this question is a big deal, we are now old hoggies.

Which is why her reaction seems to so very funny.

We women like to be exclusively desired, not inclusively.

if it's any consolation to dhanno, i was pretty devastated when i heard about rock hudson also...

Ah, the perils of having to grow up! Just leave Clive Owen off the list. The rest, I don't care so much. :)

Gay men can make excellent best friends for a girl! You get a guy's point of view without having to worry about him wanting to be "more than friends."

Mine moved to Panama and I miss him every day :(

You know, i loved the reaction "WHAT... ROCK HUDSON IS GAY...?" i mean ... OH DAMN...Rupert Everett is gay...what a colossal waste of an absolutely delicious oh-so-English
Englishman...
SOB SNIFF !!!

and i'm absolutely "amening" to the sentiments expressed regarding the gay fraternity. I have several gay friends who have been like rock solid support systems in my life. They are amazing...

I second Memsaab, although as much as I would love to have a fabulous new gay best friend, the idea of hiring quotas on friends seems a little distasteful. Hm. Must work on recruitment strategy.

Please tell me you like Pillow Talk! One of my favoritest movies - and one ripe for Bolly makeover, no?

Exactly my feelings on hearing Rock Hudson is dead( gay came later- it did not matter, he was DEAD, darn)

like dhanno, i knew when i turned 21, however old he was, if we met, i would ask him out on a date.

so knowing in one stroke, that he WOULD not be interested in a date with me( yeah, not because i dont look like doris day, but because he is gay), that had spent the last year being very sick( the same time I was daydreaming about him), and that he was now DEAD. Pretty devastating day it was.

Dhanno, hang in there...

I have a niece, who when she was 4 (or was it 3? whatever) came home from playschool and calmly announced that she'd made friends with a little boy and "when I see him, I get heart shapes in my eyes!" I just hope said boy doesn't grow up and realise he'd rather not...

But, all said and done, gay and all, Rock Hudson remains one of my all time favourite ooh-so-gorgeous stars.

Rock Hudson, i can live with, after all he died well before i learned to appreciate men but George Michael did break my heart when he came out of closet. What a waste of that wonderful tush ...

Incidently, I'd venture out and say that most Indians under 21 (that's the only info I have about D's age) would NEVER have this coversation with their mothers.

Which is a bit of a shame, really.

Shankari, I know. I almost told her after that that Hugh Grant (he was on TV at the time we were having a conversation) was a womanizer, but then thought I should leave some romance in her life.

Bollyviewer, I know, isn't that article something. And I love the illustrations.

Grasshopper, Aww, don't say we are old fogies. But yes, maybe, we are. Sigh.

Space Bar, I was too.

Memsaab, Haven't had the privilege. Bad luck about your friend. Why must friends move away?

Beth, No, I haven't seen 'Pillow Talk'. All Dhanno and I have seen is 'Man's Favourite Sport' which she thinks is the next best film in the world after 'Titanic'. I must watch 'Pillow Talk'. The synopsis on imdB sounds good.

Alankrita, Sur, I know, that 'dead' part bugged her even more. I haven't dared tell her about the AIDS yet. That would be too devastating.

Dustedoff, Aww! Having said that, I'd be worrying every time Dhanno made heart shaped eyes at any boy. And Teja is practicing punching anyone who comes close to her. :-)

you are a mean mean mother. i still harbour hopes of bumping in to george clooney.,,(DONT SAY IT...)

Another Kiran In NYC said...

Thankgoodness for people being gay. I probably wouldnt have people to go shopping with otherwise. My husband certainly dosent enjoy the shopping experience.

Ok enough with the stereotyping.

I am convinced gay is not so weird. There is a little bit of gay in all of us except for the cultural tamping down of what our true selves are.

You daughter learnt some valuable things because of your openminded attitude. I am so glad she can talk with you and ask the important questions in life.

Rock Hudson being gay was Ok. he is dead and really old time. SRK being rumored to be gay broke my heart though. I mean when he is 85 and I am 83 and we were to meet, perhaps one day we could get it together.. ya know :)

Wherei'mcalling from, yes, a really mean mother. Ok, won't say anything about George Clooney. I wouldn't mind meeting up with him either. I love him in the 'Ocean's' films.

Another Kiran in NYC, I agree totally. We all have some 'gay' in us. It took me years to figure out 'Orlando'. Hopefully, it will be easier for Dhanno. Hee, hee, hope you do meet SRK when you are 83. Should be fun.

Dipali, Oh yes, Dhanno is a bigger teacher than I've ever had at school, college, life in general. Still need to go and watch 'Slumdog'.

Well humans love complications.
And to delude one self is not that difficult.
Though I do agree with your daughter :P
Its heartbreaking to hear hot men being called gay, such a waste of a could have been happy fantasy :(