The paint companies have enticing names for their shades. not that i need to be enticed. I can go berserk with colors.

The painters said gujaratis go for whites, creams, bohri muslims like darker, more gaudy colors. Of course, they did not know I was a bohri muslim.

Teja, amused, listened to these comments 3-4 times. The 5th time, I said, well, he is a gujarati and I am a bohri muslim, so what color do you suggest we paint our bedroom? They were suitably embarrassed. though they are not sure whether we are teasing them.

I don't look like a bohri muslim to them. anyway, in defiance, I decide to get our bedroom painted an emerald green. Berger paints calls it "foliage". After the first coat, we are all reeling, frankly. I wonder if I should accept defeat.

The next morning, Teja says, let's go ahead. otherwise, we'll wonder all our lives whether or not we could have lived with the green. We can always change after six months.

The painters come back the next morning, sure that we'll have changed our minds. But they politely agree when we say, we'll stick to our decision.

Stories at the Coffee Table 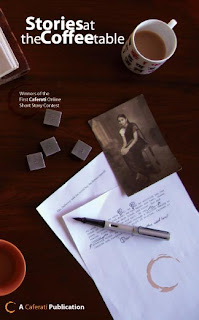 Edited by Peter Griffin, Manisha Lakhe and Annie Zaidi
With a foreword by Nilanjana S Roy
Design and cover photograph by Hemant Suthar
A Caferati Publication

A wonderful effort, and I'm so proud to have one of my stories published here.
at February 26, 2007 No comments:

Email ThisBlogThis!Share to TwitterShare to FacebookShare to Pinterest
Labels: books, my short stories

about hair and friendship

Saw Milos Forman's "Hair" the other day on Sony Pix. Late night. Well, for me 10 pm is late night. Usually, when the opening credits are coming on, I decide I can't take it right now, and slink off to my bed with a book. But maybe because I was too tired to even get off the beanbag that night, I stayed on.

For the first few minutes, I wondered where the film was going to go. The music was full on, there were troupes and groups dancing in and out, everyone was singing, dancing at the same time, women were flying by on horses - of course, the chaos was wonderful, and I love chaos, but when something starts at that high a pitch, it is a formidable task to move it ahead.

But the film continues to surprise, leading you on from one crazy event to another, the sincere-looking out-of-towner, suddenly catching a runaway horse, and proving to be a cowboy, the hippies crashing a very posh debutante party, the midnight nude dip into the river, and of course, going off to war, and the hippy boy's grave in the soldier's memorial, dead for something he did not believe in.

The film is anti-war of course, based around the hippie protestors of the Vietnam war in the US, but more than that it is one of the most brilliant expositions of friendship, the unpredictability of why and how people become friends, (specially young people), why and how they fight, argue and make up, and how they stick together for no apparent reason. The thing is, that the organic nature of friendship is mimiced in the film, with an apparent lack of interference from the director, and that is the most wonderful thing about the film for me.

I tried to do that, specially in one scene in "Lilkee" and I know how tough it was for me to convince everyone around me, that the girls become friends again for no apparent reason, and in a non-dramatic way.

I'm not sure I succeeded in putting across that elusive quality of friendship, and so of course, I was floored by what Milos Forman has done in "Hair".
at February 23, 2007 1 comment: