The one or the other

A friend sent me this sms today.

'6 am rush hour. Getting stuff ready for school. I get a call on my cell. A polite male voice wishes me 'salaam walekum, bhai jaan hai?' ... I stammer 'nahi, nahi'. My mind is blank, being yanked into a different world. I search earnestly, is it -- salaam walekum or walekum salaam? .. What was the right thing?... Only when the voice asks for bhaijaan again that I remember to say wrong number. He says sorry .. I go back to world but thoughts creep between my stupidity of salaam or walekum and my son's lunch boxes.  Could that be a terrorist? .. Strange how easy it is to make me suspicious,  even with all my intellectual upbringing which seems so skin deep.. How easy it is to break my faith on the other Indian who i've never learnt to wish ...'

It prompted me to write this.

Poor Suzi in 'The Evening in Paris', the heroine Deepa's twin sister, lost in childhood. Not only does the hero, Sam detest her for smoking, drinking, and asking for a kiss, her long-lost father rejects her too because she dances in a night club. As if it was her fault she was kidnapped when she was a kid by a drunkard villain. Even at the end, hit by bullets, she is passed on by Sam to his friend, Rajendra Nath to take care of her, and that's the last we see of her. Did she recover, did she die? Who cares, as long as Deepa is fine.

Not my favourite double role. Though Sharmila Tagore looks delectable. Dhanno says she is the prettiest heroine she has ever seen.

My favourites in some sort of order are 'Seeta Aur Geeta', 'Ram aur Shyam' and 'Sharmilee'. The first and the last, not least, I guess because both Hema Malini and Raakhee are at their most gorgeous best. 'Ram aur Shyam' because Dilip Kumar is astounding.

Amitabh Bachchan does not do that well in 'The Great Gambler', both Jai and Vijay look and behave in the same way. Shahrukh Khan does much more with his double role in 'Om Shanti Om'.

Somehow I can't seem to remember that many double roles in Hollywood films, except the twins in 'Parent Trap' and of course, the roles were played by twins. Though I love Baby Sonia in the Hindi take-off 'Do Kaliyan' better.

I suppose The Star loves himself so much, and we love The Star so much, what could be better than 2 of him in the same film? 9 or 10 of him? 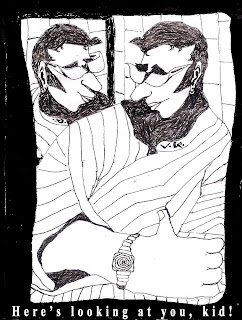 * Drawing from 'The Star' series by Teja
Most of these links will take you to 2 of my favourite blogs, Beth loves Bollywood and Filmi Geek.  My other favourite, Memsaab Story has not written about any of these movies. How come, Memsaab? Anyway, this triumvirate of women between them have an impressive list of Hindi films that they have reviewed.
at September 22, 2008 20 comments:

Email ThisBlogThis!Share to TwitterShare to FacebookShare to Pinterest
Labels: Teja's drawings, the movies

the rabbit and the raft

P-Bapu had a few preview screenings of his film 'Khargosh'. Teja has shot the film. A lot of times at private screenings, people make polite noises and slink off quietly. While we may hold forth censoriously on big-budget films on our blogs, all of us are too well aware of the difficulties of making films on low budgets, lower than The Star's bath water budget in the Alps (only Evian, good for the skin), to make smart aleck remarks after a trial show.

But after 'Khargosh', a lot of the people wanted to hang around for a while, chatting, making occasional remarks about the film as it sank into their consciousness. Some people grouped up and left together to drink away the evening, and presumably talked of the film amongst themselves. A little bit, at least, one hopes.

A lot of the audience at all the 3 screenings was from FTII. I, being a two-pice member of Khargosh's unit, doing what I love best, making wise-woman comments on other people's work, hung around at all the screenings. Watching FTII mates before and after the film, I thought this is what brings out the best in all of us. Going to the movies.

We may argue in the most pedantic way about the smallest issues on our wisdomtree mail group. We may run each other down malevolently when we are working together. We may get most nostalgic only about our drinking bouts and our subsequent brawls, passing them by word of mouth from year to year, as the stuff of legends. (Witness Tanmay's film 'I love the friends I have gathered here on this thin raft' - A tongue in cheek look at the FTII fraternity at the Wisdom Tree Film Festival)

But we are all shining faces and solemn grins when we go in to watch a film. That moment when the auditorium lights go off, and the screen lights up, is the moment we all forget the frustrations of working in Bumm-Bumm-Bhole-Land, the anxieties about our career paths, the middle-of-the-night musings on whether we should not have listened to our parents and become bankers, IT professionals, NASA scientists, architects, doctors, therapeutic  masseuses or whatever else but filmmakers.

It's at a screening we realize we are mates, after all. And our work matters. And our opinions matter. Even if they piss off everyone else.

Email ThisBlogThis!Share to TwitterShare to FacebookShare to Pinterest
Labels: back then at FTII, of family and friends, of shoots and showbiz, Teja, the movies

recuperating or resuscitating or whatevering with the rajputs

Watching 'Rajput' through one entire evening, 4 hours on Set Max with lots of ads, but a long film, in itself. Like the viral fever all over again. Drifting in and out of stupor. Time seemingly standing still, and yet taking quantum leaps forward. Don't know if it's today or yesterday.

I went to take a call and came back to a son born and a husband come back happy now that a child that is not his has been born to his wife. He cannot help but know that the kid is not his, since he has never slept with her ever. And been away since the first night. Because he cannot forget the sight of a dead man's body over her unconscious one. A man who was kidnapping her. I do not understand, just as I did not understand the strange dreams of my feverish slumbers in the last few days. The explanation for everything, anything is 'We are Rajputs'.

Towards the end of the film, I have to check up on IMDB who the director is. Vijay Anand. I cannot believe it. Ugly rape scene with villian and victim tied together, shots of bleeding female legs, all about honour and dishonour, eew.

Teja and I sat there as if we were trapped, as if we could not switch off the TV, as if it was not a perfectly beautiful evening outside. I guess we both still felt weak and feverish and too tired to bother doing anything else.

PS: The imdb plot summary is more coherent than the film.
at September 11, 2008 4 comments:

Email ThisBlogThis!Share to TwitterShare to FacebookShare to Pinterest
Labels: Banno, Teja, the movies

1. Jump on the trampoline every once in a while for 5 minutes.

3. Eat left-over dal dhokli for lunch, and plan to revamp left-over rice into masala bhaat for dinner. Or better still eat only fruits. I finally order in Chinese Chopsuey. Sinful. And actually quite yucky. And something Dhanno and Teja would never let me order. Because they don't like it.

5. Look at the photos on my desktop. Mostly shot by Teja.

6. Join up Bloglines and add feeds of some of my favourite blogs. Until I get fed up of so much organizing.

7.Clean the Mack with disinfectant. Even the tangle of wires at the back.

8. Watch part of a Jeetendra-Babita film. Aulad (1968). All about lost sons. Achala Sachdev always seems to play a mother who is very vulnerable, needs a lot of attention, and yet someone who can be very selfish, very much into doing the socially right thing. Someone very real. Was it only the roles she got, or something she brings to them? I watch her closely, the way she sits, looks down, looks up. The way her sari is draped. She seems like someone I know. Like a lot of people I know.

9. Almost fight with Teja over the phone. About something very silly. Then decide it is too silly. Call back pretending I did not almost fight.

10. Queue up a whole lot of old Hindi films on our Bigflix account. Since Teja is not around to laugh at me.

11. Watch almost all of 'Jab Pyaar Kisise Hota Hai' (1961). Until Dhanno comes in and makes me pack up. The chemistry between Dev Anand and Asha Parekh is great, specially in the song 'Yeh Aankeh Uff Yu Ma'. * Sizzling. Makes you want to fall in love again. Dev Anand was 38 when he did the film, but I can discern no difference in his look from his earlier films. Asha Parekh was a sweet 19.

* Deepuvel's YouTube homepage also has some of the other songs from the film. Worth a watch.
at September 03, 2008 8 comments: