I gaped at him.

"Can't you give me normal seats?" I gasped.

"No, only recliner seats, Madam."

I rushed into the theatre, determined not to waste a minute's worth of my 275 rupees. They were still cleaning up after the last show.

Once inside the candy-striped auditorium, I pushed the back of my seat.

She found a secret switch in the copious folds, and the chair extended, my legs went up, my back slid back.

A little boy passing by squealed, "Daddy, I want a seat like that."

I was inclined to pull out my tongue at him, but his Daddy pulled him away, reassuring him that his seat was going to be as wonderful as mine.

"Oh no," I said, as it suddenly struck me, "how will I get up for the National Anthem?"

On the dot, the screen commanded, "Stand up for the National Anthem." I scrambled out of my seat; the chair lurched with me. Dhanno meanwhile, pressed a switch, her recliner went back to a normal position, and she stood beside me, tapping her foot impatiently while I shook myself straight.

She nodded coldly. I noticed for the first time that the group of actors singing the National Anthem have weird eye-lines, because they are all keyed in. The thought that each actor has been shot separately against a green background depressed me for some reason. I slid back into the chair with relief.

"Should we have some popcorn?" I said.

"No, we've just had dinner, and you always say that the popcorn gives you a headache," Dhanno admonished.

"Will you share the popcorn with me?" I said, ignoring her.

She refused to answer.

I asked the usher next to me, "Could you get me a regular popcorn?"

He said, "Only large, Madam, no regular."

I sank into the seat, defeated.

"Isn't this chair like the one Joey has in 'Friends'?" I said.

I slid the back further. The ceiling was candy-striped too.

I woke up from a nap much later, and looked around. Peace prevailed, as people slept on their recliners. Dhanno looked more amicable in her sleep. Only the little boy behind me was awake. He was playing with the switch and had succeeded in turning his recliner into a swing. This time, I did pull out my tongue at him. His Daddy was asleep.

There's enough bad acting, screenplays, camera work, music on the small screen to sedate you, you don't need to go to the theatre for that.
at February 22, 2010 13 comments:

Email ThisBlogThis!Share to TwitterShare to FacebookShare to Pinterest
Labels: Dhanno, the movies

If you are stuck in a hotel room all by yourself, even if it is a very nice hotel room,

and you've made those calls to your family that you've tried desperately to stretch for over 30 minutes, because you so want to be home,

and your family is going all, "why don't you relax, and take that holiday from home and us that you are always talking about?",

then the best thing you can do to cheer yourself up is watch 'Jaani Dushman' (1979).

It's full of the most gorgeous women, Neetu Singh, Rekha, Yogeeta Bali, Sarika, Reena Roy, Bindiya Goswami,  Jayshree T, Aruna Irani and a few others, all a reassuring size 14 and above, dressed in tight blouses, big bare midriffs, and tight knee length triangular skirts, and  angular eyebrows (yes, it was that time). Every so often they turn up in full bridal regalia.

The men are all tall and handsome, Sunil Dutt, Shatrughan Sinha, Jeetendra, and they dress in matching trousers and jackets, with patchwork on them, and big belts on their waists. Shatrughan Sinha is delightfully, unrepentantly evil.

There are several brides, several songs, and several deaths. There is a lot of honour going around, and friendship, and brother-sister love that always ends in tears. The story goes around in a loop. Love scene, fight scene, death scene, comedy scene, love scene, and so on. The comedy scene is Jagdeep and Jayshree T trying to make out, and being disturbed by a rival lover, Paintal. The love scene is Sunil Dutt and Reena Roy trying to make out and being disturbed by a rival lover, Shatrughan Sinha. The sweet scene is Jeetendra and Neetu Singh trying to make out, and everything being hunky-dory, signifying an early death for both of them. The dramatic scene is Sanjeev Kumar, the righteous Thakur being horrified by his nasty son, Shatrughan Sinha and the mother, Indrani Mukherjee crying for her husband's forgiveness for their son. The sad scene is a bride being sent off in her palanquin by her tearful brother. The horror scene is an evil spirit attacking the bridal palanquin and killing the bride. The scenes play in a loop through the film, with insignificant changes in them. The flashbacks have the characters remembering similar scenes, as of course nothing else does happen in their lives but what's on the loop.

It also has Vinod Mehra as a mad man wearing plants sticking to rags, which are then torn aside to reveal a very, very tight police uniform. And Premnath who plays a fat Bumm-Bumm-Bhole sadhu in a ankle-length orange robe with side slits. It's not clear until the end whether or not he is nurturing the evil spirit in the cave underneath his temple.

The evil spirit wears a gorilla suit rented from Maganlal Dresswala in Girgaum Chowpatty (I presume). I'm not sure whether they had the Juhu branch back then. The suit probably still hangs around the godowns and I wonder if the evil spirit lurks in there. The evil spirit is of a hurt bridegroom whose bride sneaked out on their wedding night to meet her lover. When the possessed man dies, the evil spirit moves to another body. The gorilla suit remains the same.

It's all very delicious. And it goes on forever.  And it feels like you have gone back home for a while.
at February 03, 2010 11 comments:

Email ThisBlogThis!Share to TwitterShare to FacebookShare to Pinterest
Labels: Banno, the movies

After hearing that Salman Khan was blasting all those critics who blasted 'Veer', Teja is seriously waiting for him to react to my review of 'Veer' in Tehelka.

He's been going to the gym lately, and would love a fight. But Salman Khan is 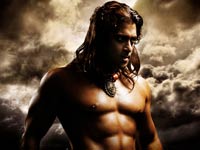 So, no, I rather he stayed far away from Teja.


In my defense, I did end my review with a line about his fabulous screen presence, and stardom. Not my fault it was edited out.

Dhanno refuses to be implicated in any of this.
at February 02, 2010 7 comments: