By Naomi Kawase. I watched it at MAMI.

A few tips on surviving film festivals, or life

1. Do your best to go with someone. Beg, borrow, steal, or call a professional escort service, if you have to. But don’t; please don’t venture into a film festival on your own. Firstly, it announces to everyone how friendless and boring you are, but more dangerously, it attracts other friendless and boring people to latch on to you.

2. If you really have no choice in the matter, and have to go it alone, then seek attention blatantly, with loads of make-up and attitude, and outrageous clothes, declaring that you are alone because most people bore you, and it’s so mediocre to hang around in mobs. Be sure to carry expensive accessories, a designer handbag and the latest cell phone. Don’t wander down to the corner chai wallah with the hordes, but buy the ridiculously expensive coffee inside the multiplex as that is all you drink. In short, do everything you possibly can to underline how exclusive you are.

3. Don’t queue up for the films; hang around pretending that you have seats reserved as a special invitee. Even if it means sneaking in after lights off, and sitting in the aisle. If you have the remotest connection to any filmmaker, crewmember or actor, who is in a festival film, be sure to attend the screening, even if it means missing the latest Jiri Menzel film. Soon, people will begin to appreciate the attention you give them, and actually start sending you special invites. People may even start asking you for your opinion on their film. Make sure to have some sufficiently abstruse comments ready. Don’t ever, ever say that you liked the film. Shudder!

4. Make sure to spend most of your time between films either in the washroom, repairing your battle paint, or on your cell phone, looking suitably annoyed and busy, as if you are warding off calls that threaten to drag you to more important work than watching films. Make sure to actually disappear for a screening or two, even if you have to spend it wandering around the city aimlessly. Take a day off; it’s terrible to be seen for all the films, on all the days of the festival. It just tells everyone that you are, as usual, out of work.

5. Please arrive in a car, preferably chauffeur driven, or a taxi. It’s pathetic to walk in, sweaty from the sun, or frizzy haired from a rickshaw drive. Leave in your own car or taxi. Don’t, under any circumstances, scrounge around for a lift. Especially if you are female. It implies you are incapable of negotiating the city on your own, after dark, and need male protection.

8. Don’t wander in car parks, with a mistaken idea of finishing off your daily walk routine, unless you are looking for illicit sex, drugs or a quarter of rum. Exercise at home.

9. Despite all these measures, there will still be people who want to talk to you. Keep fake phone numbers, and email ids rehearsed, so that they come out pat. Unless you want to be pestered with friendly calls, text messages and emails from people you are not going to remember the next day.

10. Also keep a personal story rehearsed. There are always some types who can get you spilling out your darkest secrets. There is nothing more embarrassing than sharing a significant moment or sharing a personal secret with an interesting stranger, a potential friend, and then having him or her ignore you after the next film, because they are talking to someone more interesting than you. It cannot be emphasized enough, you must learn to ignore people before they ignore you.

11. As for watching the films, do watch a few. Preferably those with the longest queues, most sex scenes and most awards. If you must, catch up with the other films on DVD, for party conversations. Remember a film festival is not about watching films; it is about being noticed.

13. Cultivate journalists, all breeds. They come in very handy, whether it is to create a buzz around you when you need it, or getting you the invite to the closing ceremony party.

Email ThisBlogThis!Share to TwitterShare to FacebookShare to Pinterest
Labels: Banno, of shoots and showbiz, the movies

My only ever two cricket matches

So, Teja is back to playing cricket. The last time he played when we were students at the Film Institute, in 1994.

I have no clue about cricket, and that is the first match I went to. Actually, I just dropped by to have a look at him, even though we were barely on talking terms then. I do remember him sending a ball flying all the way to the girls' hostel, and he likes to say he did it for me. Whether it was to impress me, or out of anger towards me, who knows? I'm certainly not going to ask, for our story back then was way too complicated.

This time, of course, Dhanno and I went as official cheerleaders. Though we reached the grounds only in the second half.

Teja woke up early, and went off at 7 in the morning. The entire family was meant to follow him. Obviously that was a mistake.

First, all of us woke up late, it being Sunday morning, then we all had breakfast, then we gossiped for a bit about lucky stones. I nagged my brother as usual to hand over my father's ruby ring, which he refuses to part with, even though he does not wear it.

Then, I did have to shampoo, since I was going to the Institute after 9 years (I've made three 10-minute visits in all this while, which obviously don't count).

Then, Mummy just had to see her doctor before she did anything else. As we waited outside the doctor's, we realized it was noon, I had forgotten the camera back home, and it would probably be lunch time before we reached the Institute.

So, we went off to buy some sinful mutton roast and naans at Cafe Diamond Queen, and went back home to eat lunch.

My sister said that if it had been her husband playing, they would all have been up much before him, and out of the house by dawn. Dhanno said Teja didn't really want us to come to the match for some reason. My sister said, obviously, since he knew that you'll never be there on time. Of course, my sister thinks Teja spoils Dhanno and me horribly. And that we take him horribly for granted.

After lunch, I was ready to go, the camera at the door lest I forget it again. My sister said she was going back to her place for a nap. My mother wanted to sleep too. My sister-in-law would have rather slept too, but I shamed her into driving Dhanno, my nephew Golu and me to the Institute. No way I was braving the harsh March Puneri sun in a Puneri rickshaw.

Downstairs, my sister said she had forgotten her packed dinner upstairs. She sent Golu to fetch it. I fumed in the car. Golu came back after 10 minutes, and said we were to wait, because his dad, my brother wanted to come too. We waited for another 15 minutes for my brother to have his bath. When my brother came down, my mother appeared at the window and asked what she was going to do alone at home, and that she wanted to come too. There wasn't enough room in the car, so my brother went back upstairs, and we waited for my mother to come downstairs. Of course, she needed to change.

By then, I was sure that my family had no consideration for my feelings for Teja and his cricket match. I sent off my sister-in-law to scold my mother. But my mother toddled over before she could do that. For the next 10 minutes I scolded my mother, and she kept insisting on getting off the car, and going back home in a rickshaw. I apologized, what else, to calm her down and make sure we did keep the car headed in the right direction towards the Institute and not turn it back towards home for some more emotional outbursts.

So after this long journey to cross a distance of 15 odd kilometers, we reached the Institute at 3 pm, for the second match of my life. The ground was abandoned. For a moment, my heart sank, but the players had only gone for lunch. By a stroke of luck, Teja's team was batting now. 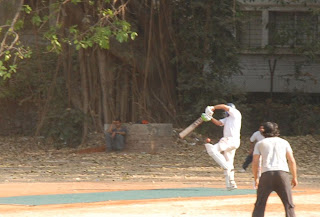 Dhanno took this photo of Teja getting out.

Of course, his team lost. It was the same 13 years ago, the student team won, the ex-student team lost. What else, with beer-bellies and no stamina. The student team is always younger, fitter, and this one had even practiced for a month. Teja of course is determined to win back his honour in the next match, next month, same place. 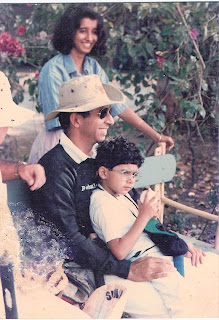 Here, by the way, is a photo of the match in 1994. Teja says meanly, that I'm out of focus, and it's Naseerbhai who's been clicked, and not me. I like it anyway. 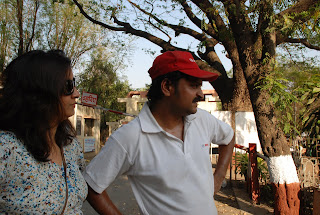 This is one of Teja and me watching the rest of the match. March 2008. 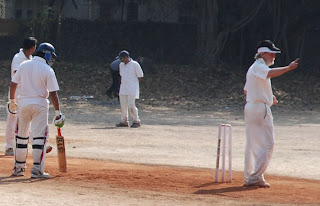 Tom Alter was still going strong, after half a day of fielding, another hour or so umpiring, then running for an injured batsman, and then batting himself. He'd played on the Graftii team in 1994 too. If playing cricket keeps you as fit as he is, all the more reason Teja should keep playing.
at March 06, 2008 11 comments: