of pain and loss and blue-and-orange earrings

My bag is snatched late evening in Bangalore, from a rickshaw. One way street. All that I have in the bag flashes before me, passport, PAN card, credit cards, bank cards, production money, two cell-phones, production diary. I yell.

Rickshaw wala turns and enters from the wrong side. We chase the thief. He crosses the road. Rickshaw wala stops the rickshaw, and runs out. I jump over the door bar and run behind.

Both of us are yelling on top of our voices. Bag-snatcher looks back. He has empty hands. I look back to see what has happened to my bag. Rickshaw wala is closing in on bag-snatcher.

He turns back towards me, grabs the bag from where he has thrown it. I run behind, yelling. He, scared, throws the bag. We yell some more, he throws the wallet and the diary he has in his hand. He escapes.

I rummage through the bag. Everything is intact. Except I have lost my production phone. I start trembling with shock.

Police van drives up. Can't make out how they got to know. They ask me questions, write things down, ask me whether I want to report. We are too late, too tired, too shocked. Can't quite face another hour of police station routine. Decide to go off to dinner instead.

Teja and Dhanno don't quite believe my story of me chasing the thief. But I think the thought of all that I would lose, and all the days of tedious work that would follow that loss, made me something I am usually not.

In my hotel room, can't find a pair of my favourite earrings. Blue and orange. Picked up from Goa. I used to wear them all the time. Were they stolen?? I go through all my things. I wonder if I should complain. Did I drop them in the room when I came back, shaken from the bag-snatcher incident?

Make a flight booking on the internet. The travel company swipes my credit card, then sends me a message that the ticket is not available, and the money will be refunded in due course. I spend a couple of hours making a complaint. Send e-mails, follow up. Don't know when I will get the money.

I try hard not to think of ill-luck. When we were kids, and fell down, and were howling, grown-ups said, "Don't cry, you've killed an ant." Though why that was meant to make us happy, I don't know. When we lost something precious, Mummy said, "It's OK, it's only a small token for your well-being." Thus, all loss and pain was meant to be taken with a pinch of happiness.

But I can't quite let go of my lovely earrings. I make drawings of what they looked like, in my notebook. And wonder who has them now.
at September 23, 2007 1 comment:

Email ThisBlogThis!Share to TwitterShare to FacebookShare to Pinterest
Labels: Banno, of rickshaws and cars, real world

Teja was taking a taxi to CST. Well, it always seems a shame to waste a free taxi ride into town. And my friend, Space Bar was having a poetry reading there. But as usual, I dawdled until the last moment.

Having spent years of being there for Dhanno in the evenings, unless I was working, I find it almost impossible to step out to do something on my own, unless it's work. Dhanno said, "You've got to learn to go out without me." Well, well, I guess that's only fair. Seems just a while ago, when I was saying the same to her.

I tried making excuses,
which Teja was inclined to believe,
and Dhanno pooh-poohed,
and a few minutes after the very last minute,
with Teja and Dhanno yelling at me, I put myself together,
leaving odd bits behind,
and chose the highest heels in my shoe rack to venture out into the world.
Appropriate enough with my wonderful sense of imbalance.

The thing about Mumbai is that halfway through wherever you are bound to go, you tend to forget, under the assault of filth, noise, traffic, smells, heat, sweat, why you had set out in the first place. It seems the taxi forgot that too, just as we were about to reach the JJ flyover, and collapsed. Don't blame it, for I was feeling a bit like collapsing, myself.

It seemed to be getting later and later. Space Bar's reading was going to last only 45 minutes, and I was wondering if I was going to hear her at all, and whether I hadn't been foolhardy to make a 2 hour trip for something I was going to miss anyway. After dumping Teja and his luggage, unceremoniously on the main road, to make his way to the train station, I decided to get lost on my way to Theosophy Hall.

Leave taxi at the wrong point.
Totter, totter, totter on high heels all the way up Churchgate Street, right up to the end,
totter back,
ask directions of an incredulous woman, "Where on earth is the Theosophy Hall, and who on earth could possibly want to go there, on a weekday evening" kind of a look from her,
cut through the train station, without a ticket,
grab the first taxi for a half kilometer ride,
tumble up 3 flights of stairs,
and see Space Bar in pink.

Thank God, she's wearing pink. Because it seems, the rest of the place has worn down over hundreds of years to grey, grey, grey. I try hard to listen to Space Bar, but before I can catch my breath, she's done. I look admiringly at the people who seem so much at home at a poetry reading. I wouldn't be surprised to see such people in Pune, or Hyderabad, or Baroda, but here in Mumbai they seem superhuman beings. Madame Blavatsky stares at me searchingly with her grey eyes, and I smile back apologetically, knowing I fall far short of any such superhuman tendencies.

However, there's beer later, at Brabourne, an ancient Iranian cafe, where legends more than make up for it's comfortable shabbiness. Space Bar reads some more poetry, which makes it all worthwhile. Then a train ride home, pretending to the people I am with, that I always take the train. Always? When - since I never go out without a ride? But it seems to be a day for doing things I haven't done in a long time.

Late at night, crossing the bridge, striding along, comfortable now in my heels, the beer does cure my imbalance, not so hot anymore, I feel brave, as if I have done something grand. Ridiculous, after having seen all those women in the ladies' compartment, exhausted, at the end of a long day, doing this day in, day out.

Just as I finish writing this, Dhanno comes in with her friend, Shi. Shi's mother is in hospital again, she had a relapse after a surgery for appendicitis, because she couldn't rest enough, and had to take the train into town, everyday to work.
at September 15, 2007 1 comment:

Email ThisBlogThis!Share to TwitterShare to FacebookShare to Pinterest
Labels: books, bumm-bumm-bhole land, of family and friends 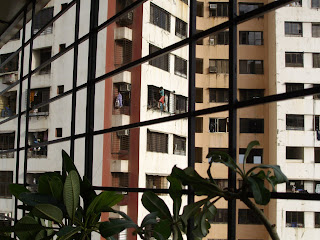 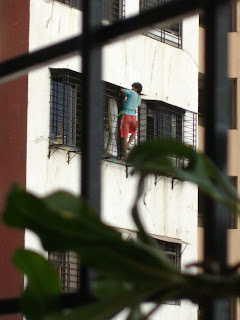