Razia Bi alias Sunita Jadhav alias Penny D’Souza was a shrewd woman. No one would guess it looking at her face. She was tiny, plain, her hair tied up in a tight bun. Her face was so insignificant that she could switch identities at will. She was anyone, and no one. The only distinctive features in her face were her eyebrows. Black, arched like impetuous question marks flung into space, quivering over tiny, brown bead eyes.


She wore faded cotton saris. Un-starched, wound tightly around her wiry frame, she seemed ready to catapult into action every moment. She was not a criminal by nature, but had learned to switch roles with ease, tell lies with impunity, and yet sleep with an easy conscience. She was not thick-skinned, just that she was so tired by the end of the day, and the hours of sleep so short anyway, she did not have to woo sleep.


Anyway, she did not even think she was committing any crime. It was hard work, she did. Very hard work. And she didn’t even get paid enough most of the time, but that’s the way of the world.


She had forgotten even when she started on this life of aliases. Perhaps, it was the fat, very fat woman with her diamond earrings, on a huge swing, suspended in the living room. The swing did not swing at all with the fat lady’s weight. She looked her up and down, and suddenly asked, “What’s your name? You’re not a Muslim, I hope.” She stood still for a moment, then glibly said, “My name is Sunita. I’m a …”. The fat lady held up a fat imperious hand. “Your caste doesn’t matter, as long as you’re not a Muslim.” She got the job, though she didn’t keep it for very long. The house was huge, and had to be mopped twice a day, her back hurt, and the fat lady was stingy.


But after that, it seemed to her, that wherever she went, people asked her what religion she belonged to. She learnt smoothly to be a Muslim with a Muslim family, a Catholic with Christians, a Hindu with Hindus. Her faded saris and faded silver chain around her neck, green glass bangles on her arms did not brand her and she was safe.


The slum where she lived had the poor of all religions; they were the same in their poverty, and the same in their joy in festivals. She knew the nuances of most religions more than the people she worked for, and it was easy for her to pretend that she was fasting during Ramzan, that she was going to be busy making sweetmeats for Diwali, that she was observing Lent, or that her son wanted a new shirt for Christmas.


As the years went by, she herself forgot who she was, her real name, her real religion. Living became more and more expensive, and her weariness did not satisfy her needs. She did not see or hear the unrest around her. She did not see the houses in her slum re-align into communal groups. She crossed the dirty lanes, the smelly 'naallah's, and the tiny hovels absentmindedly every day, not noticing the hostile glares, the muttered grumbles.


When the rioters came to her house, she looked at them curiously. They had swords and iron rods and burning torches, their faces were distorted with cruelty, but she did not know what they wanted of her. They asked her name, she looked at them as she did her prospective employers, wondering what answer they wanted her to give. Were they Hindus, or Muslims, or Catholics? Who should she be – Razia Bi, or Sunita Jadhav or Penny D’Souza? Her confusion kept her silent. Her silence saw her dead.

I've been reading this amazing anthology of Women Writers in India, from 600 B.C. to the present (1991 to be exact). Edited by Susie Tharu and K. Lalita, the anthology in two volumes, is very well-researched. Because most of the excerpts are from Indian language writing, and beautifully translated, they brought to me a literature that I had otherwise no real access to. Sometimes, more interesting than the actual excerpt itself, is the biographical essay accompanying each piece, a little bit about the author, her times, the context in which she wrote, how her work was recieved and who her contemporaries were. These short biographical sketches pieced together a social history. It made me realize how many freedom fights were fought over the years, how many were won, and how many still remain to be fought.

In a lot of communities, reading and writing for women were caste taboos. One of the most evocative pieces is an excerpt from the simply written autobiography, in Bengali "Amar Jiban" by Rassundara Devi. Written in 1876, it is the first autobiography written in Bengali. The author was an ordinary housewife, who taught herself to read and write in secret, and her account of how she learned to read is one of the most moving pieces of social statement. The anthology is replete with examples of women who broke social barriers again and again to reveal their extraordinary intelligence.

And the battles were not always against the obvious evils, those were relatively easy to fight - but the subtle, subconscious battle against gender discrimination existed even in the past. Women did not accept their subservient roles as silently and placidly as one believes. What amazes me not that women did write so extensively then but the fact that for ages, women have written about freedom, about their yearning for their individual beings, freedom from social fetters.

In fact, the first polemic against gender discrimination, a 40 page tirade "A Comparison of Men and Women " was written and published in a Marathi newspaper, by Tarabai Shinde, in 1882, as a response against the death sentence passed on an unwed mother. This was almost a century before Simone de Beauvoir wrote her acclaimed "The Second Sex".

Check out this link if you want to know more.http://www.english-literature.org/essays/indian-women-writers.html
at July 08, 2005 1 comment: 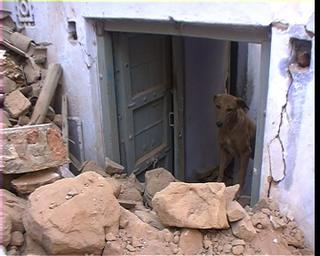 The dogs scamper through the debris, when they hear voices. They have a glazed look in their eyes, intoxicated with a surfeit of flesh, bones, blood, meat. Glutted, they look through us. After a moment, they slide back into the crevices only they know of. There is enough there to feed them for seven generations.

“Our shop was 120 years old”, he tells us. “My great-great-great grandfather hawked cloth through the city. Carrying a trunk on his head. Who will buy cloth now, in this city?”

Wealth accumulated over seven generations, crushed under sand and stone, a huff and a puff, in a minute. Naked hands claw at twisted iron rods in broken concrete slabs. Hands jump to grab pieces of iron from a running truck. Kilos and kilos of iron to be sold. Business has never been so good.

A dead body retrieved from under three slabs of concrete by hands and spades. Cameras flash. The retrievers pose with the dead body, hunters with their trophy. One more good deed done.

Everywhere there are powerful pictures, touching sound-bytes. Let’s make the most of the disaster. Let’s retrieve all we can from the debris. There’s enough there to last us all, for seven generations.

Email ThisBlogThis!Share to TwitterShare to FacebookShare to Pinterest
Labels: my docu '150 Seconds Ago', my short stories, of shoots and showbiz

The Hour of the Kites

"The parrots used to come here once", she said.

I can imagine that. Droves of parrot resting in the trees, and suddenly flying out into the sky, as if the tree had flung out hundreds of leaves. The air must have been full of song, because those were the days of color, of joy, of music.

Now the kites come. Scores of them. They sit in rows, quietly sullen, on the concrete roof ledges of the school outside our window.

The hypnotic light of the ubiquitous TV flickers over her face, ravaged not by the past, but by the increasingly non-comprehensible present, slipping away from the mind's grasp. She looks at the kites, stoically, trying to make up interesting stories about them. But the kites don't care.

They are sullen. They sit watching for the prey. A schoolchild who makes the mis­take of opening her lunchbox on the ground, a timid sparrow, a careless rat, a dead body.

The kites are sullen, cruel. They don't sing, they are dull brown. They are concerned only with their prey. The stories she tries to make up about them come out hoarse from a long silent throat, dull with pain, predicting sure doom.
at July 03, 2005 No comments:

Email ThisBlogThis!Share to TwitterShare to FacebookShare to Pinterest
Labels: my short stories

Found an old article I had written about my film "150 Seconds Ago", based on life in Bhuj after the earthquake in 2001, through a friend. It brought back so much of how and why I made the film, how it changed me as a person.

Email ThisBlogThis!Share to TwitterShare to FacebookShare to Pinterest
Labels: my docu '150 Seconds Ago', of shoots and showbiz
Newer Posts Older Posts Home
Subscribe to: Posts (Atom)