Salaam says he sniffs cloth only sometimes. How many times, I ask? He says once. A day, I ask? Or twice, he says.

But I don't like it, he says, as he wolfs down the pav bhaji I have bought him. It makes me want to sit in one place and not move, and I don't like that. But sometimes, he says, when there are too many thoughts in your head, and there is no money, and you are hungry, there is too much tension, then .. it makes you forget you are hungry, he says.

A little child, I think, should not be having so many thoughts, so much tension in his head, but what do I know?

Later in the train, I watch a woman fill up little boxes in a notebook with the name 'Ram'. It seems to work for her because in a compartment filled with tired women, her smile comes most easily. The woman sitting next to me fiddles with her cell phone, it goes beep, beep, beep, beep.

My mother sits before the TV almost all the time she is awake, sometimes even when there is only blank noise on it. Like all daughters, I wonder what will become of me when, if I become like my mother.

We all need to sniff a solvent of one kind or the other, I think, noise, music, films, more noise, books, more noise, to burn up our thoughts on the spot, for there's no space to let them go.

Whatever works, I think.

Email ThisBlogThis!Share to TwitterShare to FacebookShare to Pinterest
Labels: of shoots and showbiz, real world

The worst thing you can do to a girl is saddle her with a sister early on in life. The sister is always going to be more beautiful or more intelligent or more virtuous or more cheerful or more obedient or wear better hats - none of which helps in the making of the confident, tough personality that one ought to be.

Because however rich or famous you become, one little bit of you always knows that your parents love your sister more than you do, which in my case, my mother pooh-poohs till date. And however old your sister becomes, she will always claim that she stuck to the safe and tested path because you were wild and rebellious enough for the entire family, which in my sister's case, I refuse to acknowledge now that we are both in our 40s. Though we took different paths to reach here, I find that we haven't wandered too far away from each other.

My sister and me, here we look happy enough in our hats. 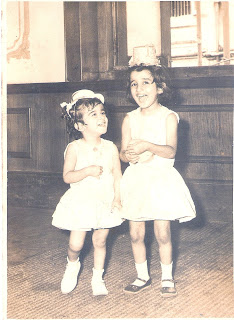 But we spent all our growing up years fighting to the point of driving our mother to tears. It's only when we both got married and left home, that we came to realize what we mean to each other.

Sisters and hats feature largely in 'Holiday' (1938) by George Cukor. Read the rest of the review on Upperstall.

let's learn how to kiss, please

What I'm wondering is what will happen to Jai (Saif Ali Khan) and Meera (Deepika Padukone) once they do get married?

Their 'Aaj' love is so bland, their kisses so like the Rubber-Duck raincoats of school days, dry in a squeaky, rubbery way, the smell of rubber obfuscating the smell of the rain.

Jai seems like a man with no practice in kissing, and if he has had practice, hasn't learned much on the job. Doesn't forebode well for their marital life. (Or is it just that he'd rather have been kissing his beautiful girl, Bebo?)

I liked Meera only in the last scene when she cried with relief once Jai did come back, and then drew away from a kiss, awkward after the long separation. At least, she stopped smiling.

For the rest of the film, I was wondering about her parents, wondering what they had done to her that she needed so much to be so nice, so understanding, so 'smiley' all the time?

She was no less mute than the 'Kal' girl from a small town, Veer's (Saif Ali Khan) love Harleen (Giselle Monteiro). The 'Kal' girl at least metamorphed into ***** ******, and had a reason to be mute (Brazilian playing Punjabi, cut all her dialogues, please!).

Anyway, to come back to kisses, my friend Tanmay Agarwal, who's been having a set-to with the Censor Board for a couple of kisses in his indie film 'Chal Chaliye' has devised a table of censor guidelines set for a kiss. Check that out and more on kisses at his site http://www.chalchaliye.com/ and don't forget to take the poll.

it's called taking the piss

You've been doing a subtle version of the twist, jig and fox-trot for the last 13 & a 1/2 minutes. You've been loosening your facial muscles while contracting other ones in an effort to look normal. You finally manage to find a public toilet and then the gatekeeper demands that you pay up 2 rupees before you enter. You flap your hands wildly and nod your head vigorously and hiss, "I'll pay you later."

In the corridor, the gatekeeper's aunties and nieces in various stages of age, weight and nudity, are sprawled in large pools of water, washing themselves and their clothes. You leap and bound across all of them, in imminent danger of slipping into one of the pools, and adding the contents of your bladder to the soapy torrents of water rushing towards the drain.

Inside the toilet, there is no hook for your bag or your dupatta. Your sunglasses hooked on to the front of your kurta fall off, and you catch them just before they fall into the dodgy contents of the Indian style toilet, immensely relieved that you haven't had to face the moral dilemma of renouncing them or fishing with your hands to procure them back because they are so very, very expensive. Of course, the toilet door doesn't close, so you hold one stem of the glasses in your mouth, roll the dupatta round and round your neck, sling your bag across your shoulder, undo your pajamas, all with one hand, while keeping the other firmly on the door.

Then you semi-sit-squat-stand, and pee, grateful that you learned this trick long ago, much to the chagrin of your more conservative mother.

And it feels more wonderful than anything else on earth. In your relief, you relax a little, and your hand falls off the door. You remember with a fond smile how your insouciant younger self regularly walked into a 5 star hotel in your hometown only to use the facilities. But the security checks at hotels now could be your undoing, you think. Someone pushes the toilet door from outside and jolted out of nostalgia, you push it back with a loud growl of proprietary anger.

Then you complete all the earlier manouvres in reverse, i.e tying up your pajamas, etc., with one hand and now with one leg thrust against the door as well. Ah, someone may say, "what about washing uhmm your uhmm or dabbing with toilet paper?", and you say "the least said the better, this is as far as things can go with one hand and one leg out of requisition".

You come outside, and your spine is a little straighter, and you could be humming if you didn't see the gatekeeper again signaling for the two rupee coin. "This is supposed to be a free urinal", you shout, pointing at the notice. The gatekeeper feigns a contemptuous ignorance of any written material. You fling a coin down and walk away, thinking well, you are going to be OK for a few more hours at least.