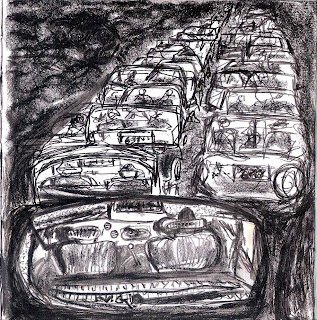 When I say: "I'm sure, there must be a traffic cop ahead, Teja. I'm telling you. They always create a jam."

- Sometimes Teja clenches his teeth and wonders how many more times in his lifetime, does he he have to listen to this statement?

- Sometimes he laughs affectionately and wonders, how many more times he has to listen to this statement in his lifetime.

- Sometimes he replies patiently: "Banno, what has the traffic police done to you? The poor guys stand all day in this noise and pollution and keep things moving."

I say: "No. They don't move their hands fast enough. So they keep one lane going. And all the others block up. Simple."

When we do pass the traffic police performing their antics at a busy crossroads, I smile triumphantly and say: "See, I told you so."

When we don't pass a traffic policeman, but a perfectly legitimate reason for a traffic jam like an overturned truck or a pair of cows confabulating in the middle of the road, Teja smiles triumphantly and says: "See, I told you so."

All said and done, I'm hoping that if Teja draws more traffic jams, he'll be less angry when we are actually stuck in one.

The traffic police in the US knot up traffic too, and it's really especially annoying when the traffic lights are working and would do a better job, and they are standing there anyway making overtime pay.

So I am not stupid when I still prefer local trains when in Mumbai. And in Bangalore, since there are no local trains, I stay put in Yehlanka. Why go out at all if one can work from home sweet home?

Memsaab, Yipee! I am right, after all. Teja will be pleased you like his drawing.

Grasshopper, Teja feels the same, he'd rather stay put at home. I have to go out every once in a while. That makes him even more angry when we do get stuck in traffic.