Lakshmi (Shabana Azmi) started well enough in 'Amar, Akbar, Anthony' (1977), enterprising, feisty, in bellbottoms. Luring eager, lecherous men into dark corners to be hit upon by her stepbrother (Ranjeet) and his goons. Turned out that she didn't really want to do this work. Her grandmother meanwhile protected a set of gold earrings meant for Lakshmi's wedding from her stepmother (Nadira), and seeing this, Inspector Amar (Vinod Khanna) was convinced that Lakhsmi was a good girl. Promptly, he invited her grandmother and her to live in his house, and promptly they agreed.

The next we see her, she is wrapped up in a sari, demure, picking Amar's washing from the clothesline, while he swings on a hammock, book in hand. She looks longingly at him, he sings of love, looking not at her, but at the sky. Though later, he does consent to sit back to back with her on the porch, while it rains outside.

The next we see her, she happens to be on the same road where her stepbrother is kidnapping Jenny (Parveen Babi). And like all true blue Hindi film heroines, she runs towards trouble and not away from it. She hides in the trunk, to be caught moments later by her smarter stepbrother.

And in the end again, demure in a sari, family photo time.

For a fortnight, the vision of that bridesmaid would not leave me. Every time I closed my eyes, I would see a woman in pink. Shocking pink. A pink gown, a pink train edged with white frills trailing behind her, a pink veil pinned on her head, with bunches of pink lace flowers on either ear.


She looks trapped, helpless, in a state of shock, very, very unhappy in her pink dress. She looks like a kid who has been told that the school bell is never going to ring again, and she will never be let out of the classroom. She looks like she is about to burst out crying like my brother Rolu on his first birthday, hot and scratchy in too-much-finery. 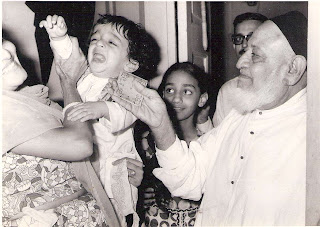 She has reason enough to cry. She's pitched against Parveen Babi who looks glamorous in whatever she wears, lemon yellow, or postbox red, with matching hats, handkerchiefs, purses and shoes. And Neetu Singh, who couldn't care less what she's wearing. Shararas and burqas are not a big deal for her, since she's even carried off checked shirts, high waisted polyster pants and square eyebrows with her bubbly charm.

I wondered how long I was to see this pink before my eyes. Until I saw blue.

Lily (Sonia Sahni) in 'Andaz' (1971). Now Sonia Sahni was a glamour icon for me in childhood, and I longed for the day I could wear dresses with holes in the unlikeliest places like her. Sadly, that ambition was fulfilled only once.

Anyway, so when she appeared at Badal's (Roopesh Kumar) party, wearing a gown made of blue Banarasi silk, I grinned with pleasure. The halter back was pretty tame, as also a small round hole on her belly. But what had my eyes popping out were the slits on both thighs that almost touched her waist. While she lurched around drunkenly and even cavorted brazenly on the floor, I went into super-protective Mom mode, wondering where are the shorts? Is she actually wearing a thong for this number? I hope she doesn't flash.

Badal however remains indifferent to her seductive charms, since he has 2 firangi babes on his arms, and even one firangi girl serving drinks, and several other firangi couples smooching around the room. Fed up of her throwing herself at him, he pushes her across the room.

However, the next morning when his pal Satish walks into his bedroom, as people in Hindi films usually do, Badal in bed, with a girl snugly ensconced on either side gives a super-quick glance under the blanket and asks: "Where's Lily?"

I'm wondering what I made of this when I saw this otherwise sweet, family film at the age of 6.

Heh! gives a super-quick glance under the blanket and asks: "Where's Lily?"

How did I miss seeing this film?

LOL :-) You probably thought nothing of it but quickly moved on to the next scene! I need to watch Andaz again...and Shabana in that pink; I wonder what she would have to say about it now?

i have not seen any of these films but the whole pink nightmare thing, lets just say that i am little familiar with that

Shabbo is already wondering : When I'm a dignified, greying lady with award-winning movies under me belt, people are still going to be watching me in pink.

Like Rolu is crying, he already knows he has a sis who is going to betray his "Rolu"ness at an age when he can't even decently pull her hair and make her shut up, thus destroying forever his manly self-image. (I hope he doesn't have teen daughters, ever. Or if he does, the Internets are buried before then).

Sonia Sahni - my God what made you remember her ? A3 in any case is an old zee rerun on rainy afternoons , but Sonia Sahni ? ...Poor Rolu , to think his siter would carry out such a quisling act on him !

Please log onto http://www.createonlinebuzz.com/ and register as a
blogger,If you are interested in making money
through your blog by occasionally writing reviews of products and services.

I want to say two things:
1. Rolu is super cute and if he were still the same size, I'd give him a big kissy.
2. OH. MY. GOD. The memories! I don't think any of us who grew up watching this stuff ever took it in. So much for sex and violence on the screen.

Will you look at that! The kid’s crying and everybody—the lady who’s carrying him, that girl (Banno?) and the elderly man—are all smiling away. Indulgently, even

I swear this thought went through my mind as a kid: Why the hell don’t these people take it seriously when I cry?

I remember bits of pieces of AAA. The climax, though, for some reason, is seared in my mind,

Grasshopper, it's my favourite childhood film too. But what to do? Some things just stick in your throat.

Space Bar, catch it if you can.

Memsaab, I'm sure. We just accepted all these things as part of life, not necessarily even relegated to the bad characters, though they were meant to be.

Tazeen, all of us are. Though I think kids now wear more comfortable clothes.

Eve's lungs, Sonia Sahni is one of my favourites. If possible, go read the link on the post at 'that ambition was fulfilled only once'.

Amrita, yes, Rolu was super cute. I know, we just didn't take in any of it.

Hades, The lady is my mom, the old man is my grandfather, the little girl is not me, but a cousin. Oh, we love to make kids cry.

Hehehehe...thats the only film in which I liked Shabana Aazmi...after that it was Makdee where I liked her acting...have no taste for films on extra-marital affairs or the tastefully done parallel cinema...so never get to see anything I can appreciate her in... It was a pleasant surprize to know that U know Gurpal, who introduced me to Taati's Monsieur Hulot films...The world indeed is small...) How and when can I see LILKEE???

Watched the clip - it made me want to be in a Bollywood film (never saw one before). It looks like such fun! And I wouldn't mind not understanding anything, because the ladies are all so lovely.

Oh for the days when vamps were truly vampish! Yes, from the perspective of adulthood, the blue dress is positively dangerous.
Poor sad Lakshmi and cute little Rolu!
Loved the reasons for her sadness:)

ROFLMAO...wow..this post is more interesting than maybe the film itself:))