i'm still lazing around so ... 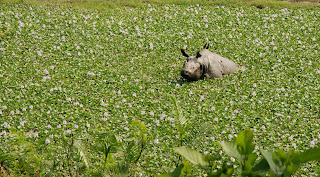 Twenty minutes earlier, another rhino had arched her back threateningly at Teja. I don't blame her, I'd hate snoopy photographers taking snaps of me in a mud bath. The forest guard shooed Teja into the jeep, even as Teja kept up the pretense that he could have outrun an angry rhino at 60 kms per hour.

Rihana, (named so by Dhanno), was happy enough however to pose for Teja, amidst her purple flowers. She even turned a couple of somersaults in the water, and stretched languorously for him. Or as languorously as a rhino can.
at May 30, 2008

they don't seem to believe in clearing the water hyacinth, no?

Welcome back Banno! I was so pleased to see you back on my blog today :-)

The Languorous Rhino sounds like a good title for something...