Guaranteed to banish the doldrums is Jacques Tati's 'Mon Uncle' (1958). Google Search throws up 4,190,000 search results for the film, so am not going to add my 2 bits about it.

But here's a photo of my make-up box. Brought for me by those migratory birds that come in from Paris every year. Placed on Dhanno's dressing table which is way more stacked than mine. Shot by Teja. 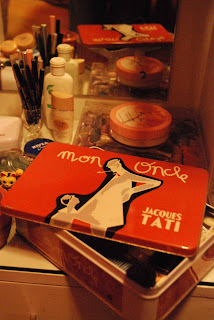 Make-up is yet another thing that makes me happy. Well, no, just a kohl pencil and a pink lipstick, really.

While Dhanno and I watched Tati yesterday, and marveled at how each frame tells a story all its own, I remembered a film I saw at IFFI, Goa last year. Milky Way/Tejut (2007) by Benedik Fliegauf, Hungary. Curiously, the review I link to, mentions Tati too.

Fliegauf puts together  a series of sketches within a frame. None connect to the other in narrative and yet weave together seamlessly to create an experience of time and space. When Pu and I came out of the theatre, I jotted down a few sketches that I remembered.

1. An old woman walks across a playground, swing in foreground. She sits on a bench, then starts moving back. Midway, she collapses. A neighbor comes to look at her. He picks her up and carries her back.

2. A woman walks across a boat jetty with a pram. She leaves the pram and walks back. A boat comes towards the jetty. A man gets down and looks at the pram. The woman comes back and takes the pram.

3. Two cyclists practice on a pile of rocks on a mountain top. They stop to look at a crane working down below. Dogs bark somewhere. The cyclists disappear below frame.

4. A man walks out of a tent on a field at night. He walks across the field and pees. He walks back to the tent. There is a lot of wind. Two men come out of the tent and struggle with it. The tent flies away. The men chase it and disappear bottom of frame.

5. A truck enters an open ground. Two men get down. They unload big rolls of plastic, red, green, yellow. One man sets up a table. The other man starts pumping up the plastic. Soon, there is a plastic playhouse. A little girl and an old man enter. They pay the man on the table, and enter the playhouse. They lie down on the floor and disappear from frame.

6. Two boys practice dance on a rooftop overlooking the city at night.

There were more, the images striking enough to have stayed with me after these many months. 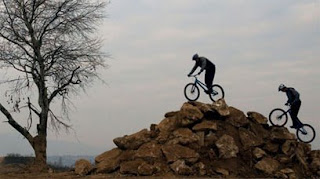 What stayed with me also is a conversation I overheard while I scribbled - between two film students, a Mallu from FTII, Pune and a Bong from SRFTII, Kolkata. Both chose to speak in Hindi.

"Accha hain, tu idhar dekh lee thee, udhar tere ko dekhne ko nahin miltee thee." (It's good you saw it here, you wouldn't have been able to see it there.)

All those who know a Bong and a Mallu in real life will know what's funny about this conversation. They are prone to mix up their genders in Hindi. Everything is feminine, usually.
at March 28, 2009

why can i not stop grinning ear to ear....