jacks, all of us 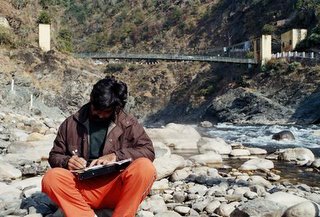 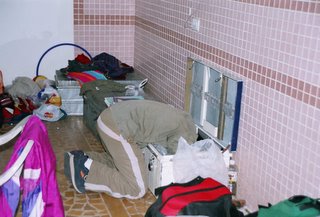 Suresh at Rudraprayag, with his head in the continuity book

Manoj at Forest Castle, Pune with his head in the costume trunk

Working on a low budget film, or rather, ultra low budget film has it's own postpartum glamor. On "Lilkee" most of us were working overtime, managing more than 2-3 departments. Manoj not only played seven cameo roles, but also helped me to write the script, rehearse with the children, and take care of their costumes on the shoot. Suresh was not only playing the main lead, but also taking care of continuity and background action. Vipin took care of sound and frayed tempers. Satish did the stills, and helped me with accounts, and production work. I discovered that my sister, Farida and sister-in-law, Farzana were excellent costume directors apart from being caretakers for the children. Vivek had to be the art director along with being the cinematographer. Aiman not only played her role to perfection, amidst conditions of extreme stress, but helped with choreography and make-up. And me, what did I do, amongst all this? It seems to me that my biggest strength has been the people around me, and my ability to pick their brains, their talent, and their hard work.
at February 16, 2006

Email ThisBlogThis!Share to TwitterShare to FacebookShare to Pinterest
Labels: fotoos, my children's film 'Lilkee', of family and friends, of shoots and showbiz

MsPsycho said...
This comment has been removed by a blog administrator.
12:00 PM